In my original home we always had a real tree, one with roots on if possible, which we could plant out afterwards. Very rarely did these trees take, but there are three survivors in the garden there now at various stages of development and all looking quite healthy.
After leaving that home I continued the genuine green Christmas tree tradition, but rather than buy something that I might vainly attempt to plant in the garden afterwards I maintained a tree in a pot which lived happily outside throughout the year, only to be stressed out by the mid-winter heat of my home for about 15 days of the year.

In 2014 I decided to give my long suffering tree a break, and in all honesty the pot’s now really too big to be lugging in and out of the house. Since most of the trees in the area around my house have dropped their leaves for winter and stand unveiled in their delicate nakedness against the wintry skies, I decided it would be more in harmony with reality to find a simple branch for the representative tree in my home for the Season.
Having been much part of the festivities across northern Europe for centuries, the Christmas Tree was popularised in Britain during the reign of Queen Victoria. Although Christianised in its use, the bringing in of a tree to your home almost certainly has its roots in pre-Christian Paganism.

There are various theories regarding the meaning of trees and greenery within the Pagan traditions of Europe. My understanding is that the tree was thought to have a spirit which we might see as the Green Man or life force of nature. This life force within the tree could be honoured by bringing it into the home at this time, and so in an earth based Pagan understanding, such honour would encourage the eventual return of the warmth, light and lengthening of days, with the hope of Spring returning.
I like the idea that humans felt that they could both respect and take part in the natural processes of the Earth. Simple and limited by scientific standards though their understanding was, these earlier people had a strong sense of both their vulnerability and their power within the environment, and demonstrated consciousness of dependence on the provisions of our Planet.

And so it struck me that Christmas (a Christian festival overlapping in time with the Celtic/pagan mid-winter festival of the Solstice) might be an appropriate time when the tree, as representative of the Planet’s Life as a whole, might be honoured.

As a Christian my understanding is that Earth is the wonderful creation of God and that His son Jesus is both Saviour and the ‘Living Word through whom all things were made.’ John 1.3. In this sense we can see the finger prints of God in everything and the Divine presence running throughout the natural world and the whole Universe.

The teachings of the Church have largely emphasised God being beyond everything, with Jesus as the Saviour of the World, while there has been less emphasis on the omnipresence of God or recognition of the Devine within. Because of this there is little within the Church calendar (with the exception of Harvest Festival), which provides a base from which to celebrate the natural world or to encourage a sense of our responsibility as humans to care for the Planet. Recently, and most notably in the Popes publication of Laudato si’ (a strong comment on the responsibility of all people to take note of the need to conserve, respect and protect the Planet’s resources), there have been efforts made within the Church to put care of the environment on the agenda. But until now my experience has been that, apart from a few excellent hymns, there is rarely much of an opportunity to demonstrate respect, awe and wonder at a World which God has made and through which He moves, and on which we are all (for the time we are on the Planet) dependent.

Because of this I have looked for a way to honour and celebrate the seasons within my own life while remaining true to my Christian Faith, and I have found the 8 Celtic Earth based festivals of the year a helpful base from which to honour and celebrate the Earth’s natural cycle.
So that’s how I came to get creative with my Christmas tree of 2014, developing a way to celebrate each season throughout the year (not just Christmas). My simple twiggy branch has been a way to express the changes in the natural world around me using some odd bits I’ve found, been given, made or bought. It’s been a really satisfying thing to do and spiritual in its expression; as I performed a little ceremony of my own with each change. The process has helped me feel more connected with the earth and more mindful of the way I use its resources as well as being an interest to those who have visited my house this year.

Here are some photos that I took of the tree as each season progressed, with some explanation for the choice of decorative symbols.

St.Bridget of Kildare is a strong Irish Celtic Saint born in 451. She was the only woman to be made a bishop, and founded a monastery at Cell Dara (Kildare), “Church of the Oak”, on the site of an older pagan shrine to the Celtic goddess Brigid. This festival marks the beginning of Spring and the lambing season. Traditional Saint Bridget’s crosses are made from rushes – like the ones above that we made at the St Bridget’s meal that I held at my house last year.

I left just a few of the Christmas baubles on the tree and added some pictures of Saint Bridget and little Saint Bridget’s crosses. The ceramic ram represents the coming lambing season. 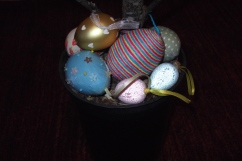 An equal balance in the length of days. A time of new life bursting forth, celebrated with the symbols of eggs, spring flowers, the Easter Bunny or hare. Easter is closely linked with this festival, Easter always being the first Sunday after the full moon after the Equinox.
I bought these eggs from a local gift shop – they caught my eye in the window as I was passing. 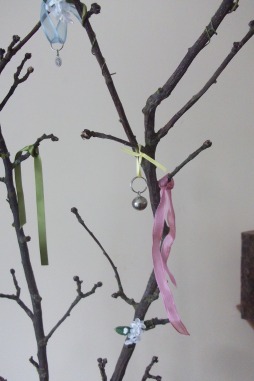 A celebration of life and the unity which fosters it, often noted for the dancing around the maypole, and Morris dancing on sacred sites and church towers. The Church equivalent might be Rogation Day (the ancient practice of marking boundaries and blessing crops), which always falls on the 5th Sunday after Easter. The following Sunday being Ascension – the day when Jesus returns to Heaven. 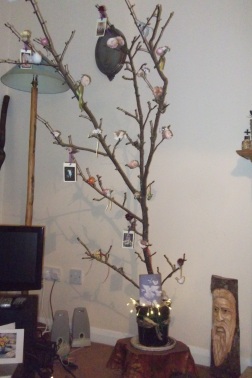 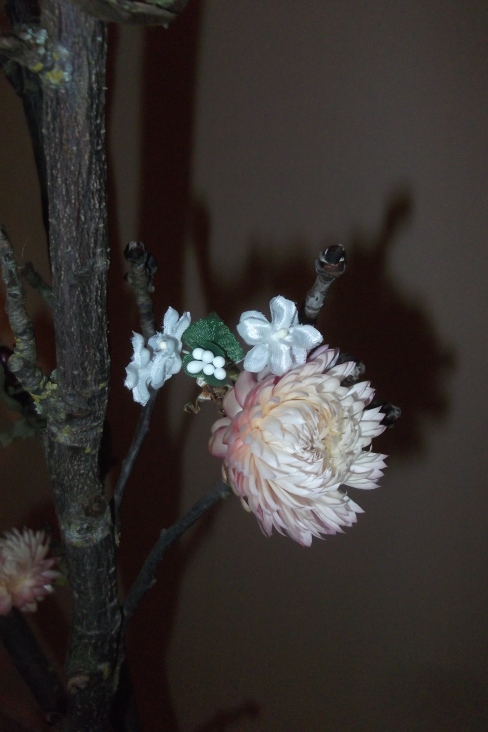 A time when the sun is at its greatest height in the sky and the days are longest. The Church has no special festivals around this time of year.

For this season I added Helichrysum to the blossoms and the ribbons.

Marks the beginning of the harvest, with a focus on the ripening of the grain.
I gleaned some wheat stems from the local fields to make a small wheat sheaf for this season. 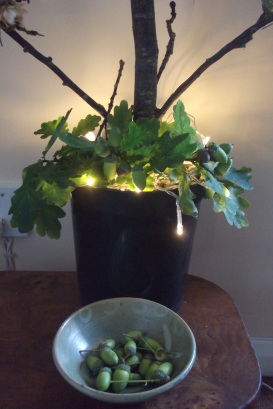 Mid-harvest. At this time the days and nights are of equal length. The Church celebrates Harvest Festival around this time and thanks God for the bounty of the Earth. 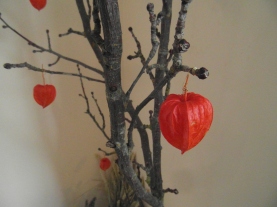 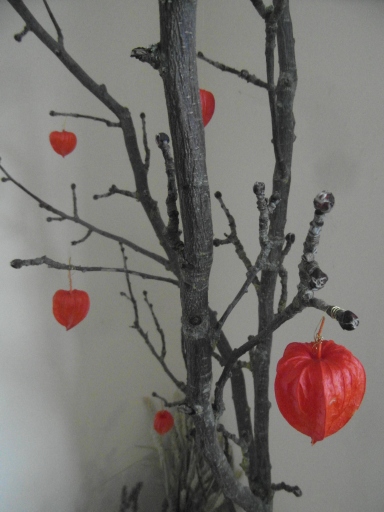 The end of Summer and the end of the harvest – a time to reflect and remember deceased loved ones. The Church celebrates this as All Saints Day on 1st November and All Souls Day on 2nd November.

I took everything off the tree and added these natural Chinese Lanterns, they seemed to represent both death and light to me.

For Christmas 2015 I added a few traditional gold baubles and an angel or two along with my Father Christmas/St Nicholas figure.

Yule – Winter Solstice – Mid winter festival. A time of hope as we celebrate love, friendship, the birth of a very special baby and the light once again returning as we pass the longest night.

May your year be fruitful and harmonious, may you grow in yourself and in your community, may you find peace and find ways to express the beauty of which you are made, while you enable others to do the same.
Amen.

Lover of nature and people

Growing up close to the Kentish countryside with chickens, ducks, guinea-pigs and even a sheep or two in the garden, I have always felt close to nature. We spent plenty of time outdoors as a family, and holidays nearly always involved camping on a farm somewhere. I was lucky enough to have a mother who loved nature as much as I did and actually paid for me to be taken on nature rambles by a couple of local elderly ladies. I learned lots from these timeless trips, and quickly developed a love of hedgerows, fields full of wild flowers and all sorts of creepy crawlies. I absorbed into my system a love of the changing seasons with all the smells, colours and sounds that tell us where we are in the year’s calendar. I almost never complain about the weather, because I know that all seasons carry their own beauty.
I attended Christchurch University and thoroughly enjoyed studying Ceramic Art and Religious Studies. After graduating I opened a pottery in an old stable at Tong Farm, Headcorn in Kent. The pottery provided a great place for me to develop my creativity and my ideas as well as to teach. Many students came to learn simple ceramic skills and enjoy the peaceful ambiance of the studio. During this time I developed a variety of work and found ways to link my love of nature with my understanding of spirituality and my Christian faith. In the year 2000 I created five pieces depicting the life cycle of nature using the imagery of the emergence of the tadpole from frogspawn into a frog and beyond into death. These were in exhibited in Rochester Cathedral as part of a special exhibition to mark the millennium.
After ten years of running the pottery I felt that a change was due, and started to focus on painting and photography. Hoping to use my camera and love of nature to capture the simple and available beauty around me, I began to develop visual presentations and calendars as a way of helping people recognise the value and wonder of the natural world.
My view is that while modern lives are very busy, it’s good for us to stop for a moment to appreciate the world around us – the world that we are a part of and that sustains us – Mother Nature. Sometimes we can go a little deeper even and feel as so many before us, that presence of a Greater Peace that we may call God.
People feel happier and healthier when they are not too far from nature. I hope that my work helps people to feel some of that sense of wonder that I experience, and to appreciate the simple beauty that each changing season brings. 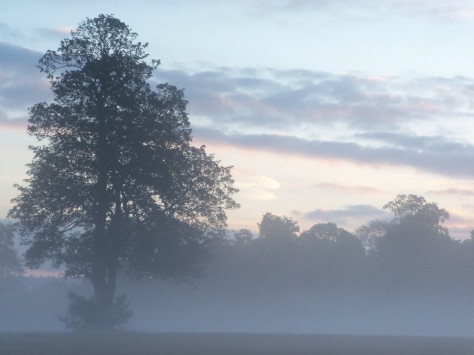